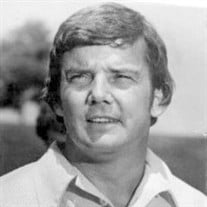 Warren Anthony Powers of Chesterfield, MO passed away on November 2, 2021, at the age of 80. Warren was preceded in death by his parents, John Francis, and Aileen Frances Powers. He was the devoted husband of the late Linda Powers, dear brother of John (Marianne) Powers, Rosanne McGuire, D.J. (Gretchen) Powers, Marita (Ivan) Deatsch and Jim Ham (late Mary Aileen Ham). Brother-In-Law of Kathy Rather (late Wesley) and Nancy Winkelmann (Jim). Loving uncle, great uncle, cousin, and friend to many. Also dear to Warren’s heart were his fellow coaches, teammates, and players. Warren was born on February 19, 1941, in Kansas City, Missouri. Growing up as one of six children, their bond as a family was very strong. They often relied upon each other for guidance. Warren excelled in a variety of sports throughout his younger years in Kansas City, but football was his greatest passion. He graduated from Bishop Lillis high school in 1958 where he was an all-state quarterback. He pursued his love of football as a scholarship defensive back playing for legendary Coach Bob Devaney at the University of Nebraska, where he lettered every year. Powers went on to play professionally for six seasons with the “Silver and Black”, the Oakland Raiders. Warren still holds records with the Raiders, he recorded 22 career interceptions and two touchdowns. He started at safety for the Raiders when they won the 1967 AFL championship and played in the second AFL-NFL championship game - today known as Super Bowl II. Warren and Linda shared their strong bond of faith and love with those who surrounded them. Before and after every game - win or lose - Coach Powers encouraged the players to grab a hand and he led them in the Lord’s Prayer. The impact that Warren had on his players is often called remarkable. Captain Cory Cathcart, USN, Naval Special Warfare, a former Tiger player who went on to serve our country commented that, Coach Powers forged us into Brothers that stood the test of time. He taught them to be men on and off the field, to be humble in victory and steadfast in adversity. He prepared them for the game of football, while quietly preparing them for the game of life as well. Powers was a part of the University of Nebraska coaching staff under Bob Devaney and Tom Osborne until 1976. He then took a job as head coach at Washington State for one season before taking over as head coach - in his home state - at the University of Missouri in 1978. Powers had tremendous success in his first year as head coach of the Tigers where he re-awakened the program and built on his own legacy. In his first game, Powers led Mizzou to a 3-0 upset of third-ranked Notre Dame - the defending national champions who were led by former Mizzou Coach Dan Devine and quarterback Joe Montana. Powers also knocked off No. 2 Nebraska, his alma mater, on the road to end the 1978 season. That 35-31 victory remained Mizzou’s only win over the Cornhuskers until 2003. Mizzou finished that season with an 8-4 record and Powers won the 1978 Walter Camp Coach of the Year award. He led the Tigers to four consecutive bowls and five across his tenure at Mizzou. He compiled a 46-33-3 record at the University of Missouri. Powers was inducted into the Missouri Sports Hall of Fame in 2017. Warren Powers legacy is rooted in his strong faith and family values. He will be remembered as a standout player for the Nebraska Cornhuskers and Oakland Raiders, the fourth- winningest coach at the University of Missouri and most of all a loving husband, brother, brother-in-law, uncle, coach, and friend. Those who were lucky enough to know him will carry memories of Warren in their hearts. His legacy will carry on through the many lives he touched. Warren was a loyal and supportive husband and best friend to Linda throughout their 52 years of marriage. When Warren was diagnosed with Alzheimer’s disease in 2011, they formed a courageous team together to fight the disease. Linda dedicated her time to fundraising for research to help find a cure while becoming a voice and advocate for Warren. Linda passed away just 6 weeks ago and now they are joined together dancing as a team once again. In lieu of flowers, memorial donations may be made to the Alzheimer’s Association. Alzheimer’s Association - Greater Missouri Chapter, Attention: Warren Powers Memorial, 9370 Olive Blvd., St. Louis, MO 63144 Services: Funeral mass will be held at Ascension Catholic Church, 230 Santa Maria Drive, Chesterfield, MO 63005, at 10:00 am on Wednesday, November 17, 2021. Immediately following interment at Bellerive Gardens Cemetery, a Celebration of Warren’s life will take place. A service of the SCHRADER Funeral Home and Crematory. Friends may sign the family's on-line guestbook at Schrader.com.

Warren Anthony Powers of Chesterfield, MO passed away on November 2, 2021, at the age of 80. Warren was preceded in death by his parents, John Francis, and Aileen Frances Powers. He was the devoted husband of the late Linda Powers, dear brother... View Obituary & Service Information

The family of Warren Anthony Powers created this Life Tributes page to make it easy to share your memories.

Warren Anthony Powers of Chesterfield, MO passed away on November...

Send flowers to the Powers family.