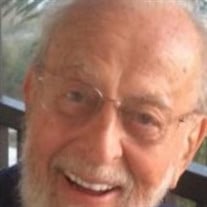 Thomas Muchisky, 86, died Monday, September 27, 2021. Tom was born December 6, 1934 to Peter and Tess Muchisky of Seymour, Connecticut and graduated from high school there in 1952. During his high school years, Tom was active in sports and drama activities. After high school, he attended the University of Connecticut where he was a member of the Phi Beta Delta fraternity. He graduated from University of Connecticut in 1956 with a bachelors degree in mechanical engineering. He never stopped being a UConn Husky and wore his school colors with pride throughout his lifetime. He worked for IBM for two years. Tom then went on to Harvard and graduated summa cum laude with an MBA in 1960. From there, he and his family headed to California where Tom worked for Litton industries. He and his wife, Jean, adopted two daughters, Linda and Laurie. Then, in 1966, a son, Michael was born. The family moved to St. Louis where Tom started a medical equipment company, (General Physiotherapy), which ultimately became successful on an international level. Over the years, Tom was granted numerous patents on his medical equipment which was designed for massage, physical therapy, and to relieve pulmonary congestion. The success of the business was due not only to the quality of the equipment, but also to the camaraderie which developed among the small but dedicated group of employees who remained with Tom over many years. In 1984, he met the love of his life, Michi (Iwata). They married in 1986, expanding the family with her three daughters, Christine, Michele and Mia. Over the next 35 years, they lived and enjoyed life in a home they had designed together. Their home was the site of numerable birthdays, holidays, pool gatherings, poker games, and Mexican Train marathons. As lovers of animals, Tom and Michi rescued many beautiful dogs. During the last five years of his life, although he suffered a number of health setbacks, Tom remained upbeat and positive. He had a great sense of humor always making us laugh, entertaining and amusing us with his playful antics like wearing wigs on the tennis court. He enjoyed life with his family and friends. Throughout his long life, Tom was loved by family, friends and employees for his generous and optimistic nature and support he offered to people in need. Tom is survived by his wife Michi Muchisky; children Linda, Laurie (Shawn) Kelsey, Michael (deceased), Christine (Phil) Tessereau, Michele (Suthern) Hicks, and Mia (Stan) Boylan; grandchildren Allison, Madison, Lucas, Nova; brother Dennis (Minh) Muchisky. Visitation on Friday, October 1st from 5 - 8 p.m. at Bopp Chapel, 10610 Manchester Rd. Funeral Private. Please no flowers. www.boppchapel.com

Thomas Muchisky, 86, died Monday, September 27, 2021. Tom was born December 6, 1934 to Peter and Tess Muchisky of Seymour, Connecticut and graduated from high school there in 1952. During his high school years, Tom was active in sports and drama... View Obituary & Service Information

The family of Thomas P. Muchisky created this Life Tributes page to make it easy to share your memories.

Send flowers to the Muchisky family.