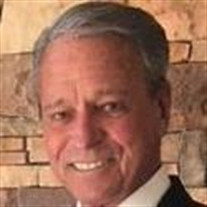 Feldewerth, Theodore “Ted,” of St. Charles, Missouri, passed away Wednesday, March 14, 2018, at the age of 74. Loving husband of Jacque Anderson Feldewerth; beloved son of the late Theodore William and Genevieve Feldewerth; devoted father of Christine (Joseph) Randazzo, and Kimberly Laine (Timothy Michael) Obenhaus; cherished grandfather of Joey Randazzo, Jessica Randazzo, and Amanda Obenhaus; dear brother of Timothy (Kathy) Feldewerth, Cheri (John) Busker, and Ann Feldewerth; treasured great-grandfather of Leona Mae Obenhaus and Anthony Joseph Randazzo. He is preceded in death by his first wife, Bonnie L. Feldewerth; grandson, Evan Michael Obenhaus; and brother, William Feldewerth. Ted was a member at Calvary Church and faith became a priority in his life. He received his bachelor’s degree from South East Missouri State. Ted was an elegant writer and touched the hearts of many through his CareingBridge.org blog. Ted was a great photographer. He expressed himself through the lens of a camera. Ted was an organized person and worked well under pressure. He enjoyed playing tennis and riding his bike. He was a loyal and generous friend. Ted was a real gentleman and family was his main priority in life. Ted was dearly loved and will be greatly missed by all who knew him. His Final written thoughts were, “Love to all. Trust in Jesus NOW, NOT LATER OR WHEN YOU HAVE NO OTHER OPTION!!!! Enjoy his gift while you are alive and can make an impact on those around you. The reward is so great if you do.” Memorial contributions may be made to CaringBridge.org Visitation: Baue Funeral & Memorial Center, 3950 West Clay, 63301 Monday March 19, 2018 3:00pm to 6:30pm Funeral Service: Baue Funeral & Memorial Center, 3950 West Clay, 63301 Monday March 19, 2018 6:30pm Interment: Bellerive Gardens Cemetery, 740 North Mason Road, St. Louis, MO Tuesday March 20, 2018 10:00am

The family of Theodore "Ted" J. Feldewerth created this Life Tributes page to make it easy to share your memories.

Send flowers to the Feldewerth family.