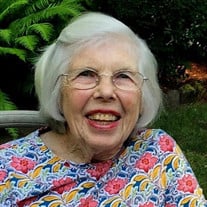 Rosemary Kenney passed away on March 19, 2020 at the age of 91. She was born on September 11, 1928 in Lewiston, Idaho to William and Francis (McKim) Olney. She has a younger sister, Gwen (Twachtmann). Rosemary and her sister were raised by her mother on the family farm in Iowa following their parent’s divorce. She told many stories about life on the farm. She would point out to her children how great life was with such luxuries as indoor plumbing and hot tap water. They raised chickens on the farm and the chicks were delivered in boxes by the post office. She and her sister would enjoy picking wildflowers in the woods nearby. She attended a one-room schoolhouse. After graduating from high school, she attended Graceland College in Lamoni, Iowa. Then she went to the University of Montana where she joined the Tri-Delta Sorority and graduated with a Bachelor’s degree in Secretarial Science. It was there that she met Leon (Skip) Mitchell whom she married in 1950. They moved to Spokane, Washington where they had two daughters, Sue (Lumley) and Kathy (Thienes). Leon died in an airplane accident in 1956 while serving in the United States Air Force. Later, she married George Daigle in 1959. They had two sons, David and Doug Daigle. George passed away in 1984. Rosemary worked as an Executive Secretary in the hotel industry in Spokane. She met and married Malachi P. Kenney in 1994 and became mother to John Kenney (deceased), Mal Kenney (deceased), Andrew Kenney, Christopher Kenney, Joan Jamerson, Sarah Elizabeth Venner, Mary Brigid Kenney, Mary Kenney Gleason, and Mathew Kenney. They lived in Chesterfield, Missouri and Punta Gorda, Florida. They enjoyed retirement together traveling, sailing, and visiting family. They were members of the local yacht club. Malachi passed away in 2018. Rosemary later moved to Troutdale, Oregon to be near her family. Rosemary attended a Methodist Church wherever she lived; Audubon Park United Methodist Church in Spokane, Washington, 1st United Methodist Church, Punta Gorda, Florida and United Methodist Church Of Green Trails in Chesterfield, Missouri. She loved singing in the church choir and played handbells. She enjoyed playing piano. Her hobbies were embroidery and gardening, growing vegetables as well as flowers. She was known for her Snickerdoodle cookies and raspberry jam. She loved taking walks. Florida was her happy place walking on the beach and gathering shells. Her cheerful smile delighted others and her grateful heart always counted her blessings. She is survived by her sister, sons, daughters, twenty-one grandchildren, and fifteen great-grandchildren. She was preceded in death by her husbands, two sons and one granddaughter. She will be buried alongside her late husband, Mal Kenney in Creve Coeur, Missouri. A graveside service is planned with details to be announced at a later date.

Rosemary Kenney passed away on March 19, 2020 at the age of 91. She was born on September 11, 1928 in Lewiston, Idaho to William and Francis (McKim) Olney. She has a younger sister, Gwen (Twachtmann). Rosemary and her sister were raised by her... View Obituary & Service Information

The family of Rosemary Kenney created this Life Tributes page to make it easy to share your memories.

Send flowers to the Kenney family.