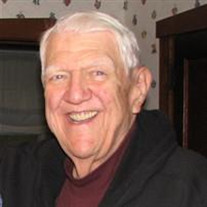 Robert T. West West, Robert Thomas of Manchester, Missouri was born July 19, 1934, in Toledo, Ohio, to Harold and Sophie (nee Gohr) West, and entered into rest, Tuesday, March 13, 2018, at St. Luke’s Hospital in Chesterfield, Missouri, at the age of 83 years. He is preceded in death by his parents, wife Sally, two sons Robert and Glen West, and his only brother, Charles H. West of Chicago. He is survived by two children, Mark West and Ann (Michael) McBride and three grandchildren, James West, Amanda West and Duncan McBride. Robert (Bob) graduated from St. Louis University – Parks College, Class of 1957, with a degree in engineering. His career at McDonnell Douglas as a liaison engineer spanned 40 years, retiring in 1997. His knowledge and love for planes, cars and books about planes and cars was exceptional. Race day Sundays were the best, he was an avid Formula 1 and IndyCar fan. He also enjoyed spending time with family, friends and his dog Lyndee, his loyal companion. Graveside services will be held on April 6th at 2pm at Bellerive Gardens, 740 N. Mason Road, Creve Coeur, Mo. Memorial donations may be made to: The American Heart Association, 3816 Paysphere Circle, Chicago, Il 60674-0001 or Open Door Animal Sanctuary, 6065 Duda Road, House Springs, MO 63051. Family and friends can review and share stories, photos and condolences online at www.stlcremate.com and follow details of this event and others in the community at www.facebook.com/stlchapelhill. To send flowers or a memorial gift to the family of Robert T. West please visit our Sympathy Store.

The family of Robert T. West created this Life Tributes page to make it easy to share your memories.

Send flowers to the West family.