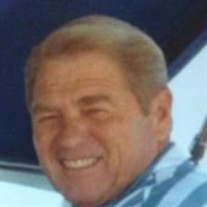 Robert Keane Crutsinger, fortified with the Sacraments of the Holy Mother Church, passed away peacefully surrounded by family on Sunday, February 27, 2022. Beloved husband, father, grandfather, great grandfather, brother, uncle, and dear friend, Bob resided in Naples, FL. Born September 2, 1930 in St. Louis, MO to the late Robert M. and Gertrude Keane Crutsinger. Devoted husband of the late Mary Lou (Angie) Crutsinger. Bob was Angie’s cherished companion, best friend and co-captain for over 62 years. Wonderful father and father-in-law to Cary (Dan) Renz, Rusty (Beth) Crutsinger and Katie (Dan) Sullivan. Loving “Papa” to grandchildren Lauren Renz Ruder (Michael), Megan Renz, Daniel Renz, Kelly Crutsinger, Colleen Crutsinger, Caroline Sullivan Rapone(Robert), Dan Sullivan Jr (Caroline), Bob Sullivan and great grandchildren Penelope, Cary and Charlotte Ruder, Lucy and Michael Rapone, Tee and Lily Sullivan. Dear brother of the late Jane Riehl. Faithful, loving friend to many. Mr. Crutsinger graduated from Quincy University after serving in the U.S. Army . His business career spanned over 40 years starting at NCR in 1955 where he promoted quickly from junior salesman to manager of major corporate accounts. He joined Wetterau, Inc. in 1970 as VP of affiliated operations. He spent the rest of his career with Wetterau becoming the first non-family member to serve as President and COO of the company. He served on the company’s Board of Directors for 20 years becoming Vice Chairman until his retirement in 1992. He remained Chairman of Wetterau Properties REIT until 1994 and was a Principle at Cortland Associates until 2019. Mr. Crutsinger served on many charitable and corporate boards throughout his life. Bob was an avid boater with Angie by his side. They spent a lifetime on the waters of the Meramec and Mississippi Rivers, Lake of the Ozarks and Gulf of Mexico. Together they loved to fish, float and entertain friends on their beloved boats ending with “Going My Way”. Bob loved people and never met a stranger. He was known for his stories, especially about his children and grandchildren. In his eyes, they were all fabulous. He loved Angie fiercely and missed her terribly until their beautiful reunion in Heaven. Private Mass and burial. Prayers are greatly appreciated. In lieu of flowers, donations can be made to the Gary Sinise Foundation or a charity of your choice. Arrangements by Bopp Chapel

The family of Robert Keane Crutsinger created this Life Tributes page to make it easy to share your memories.

fortified with the Sacraments of the...

Send flowers to the Crutsinger family.