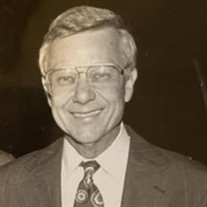 Robert Gray McKelvey “Bob” of Town and Country, MO; Longboat Key, FL and Star Lake, WI passed away peacefully and in the love of Christ on Friday, February 19, 2021, at home in St. Louis. He was 92 years old. Bob was born on December 18, 1928 in St. Louis, Missouri to James Gray McKelvey and Muriel Morgan and was the younger brother of James M. McKelvey and older brother of Charles Forbes. Bob was a graduate of University City Senior High School in 1947 and Westminster College in 1951 with a degree in Economics and a member of Kappa Alpha Order, fraternity. He served in the United States Air Force between 1951 and 1953, as a Second Lieutenant. Bob was a third-generation homebuilder and developer between 1953 and 2001 in St. Louis and St. Charles County, Missouri. Bob went to work for his father, James G. McKelvey in 1953 and married Peggy in 1955. He was one of the first homebuilders who recognized the potential of St. Charles Country. Under Bob’s leadership, McKelvey Homes built over 10,000 homes and developed more than 60 subdivisions. Bob is known for his impeccable reputation and respected for having the highest level of integrity. At age 16 Bob became an Eagle Scout & at 17 Bob earned his private pilot’s license and enjoyed aviation throughout his life, well into his 80’s, flying his Beechcraft Bonanza all over the county. He also loved to pilot his boat and chart long overnight trips with Peggy. He was an avid reader, enjoyed wood working, fishing, snow skiing and mostly working outdoors in the remote forestland of northern Wisconsin. He truly embodied a person of intention and adventure. Bob was on various boards and committees; He served as a Director for Mark Twain Bank between 1965 and 1982 in St. Peters and O’Fallon MO. Charmain, Board of Directors for Mark Twain Harvester Bank, 1980. Associate Chairman, Mark Twain Bank O’Fallon, 1965-1981. He served as a Director of the YWCA, St. Charles County, as Chairman of the Building Committee. He served as Chairman of Board of Trustees, St. Peters Hospital in 1982 and 1983. He received the St. Charles County Chamber of Commerce “Citizen of the Years” award, 2000. Bob was a member of the Life/Spike member of the National Home Builders Association and served as the President of the HBA of Greater St. Louis in 1978. He served on many committees & boards in St. Charles County, including The Academy of the Sacred Heart, Lindenwood University, Salvation Army, United Way, United Services for the Handicapped and American Red Cross. Bob is survived by his loving wife of 65 years, Audree “Peggy” McKelvey (nee Fischer), his brother Charles Forbes; 1st cousin Reverend James McKelvey Tobin, his three children Patricia McKelvey (Tom Bushman), Christine McKelvey, and Mary Lee Heinrich; Grandchildren Jennifer (Patrick) Devers, Preston McKelvey, Michael Hellmann, Grace and Elliott Heinrich; and Great-Grandchildren Leighton, Liam, Brady, and Margaret Devers. A visitation will be held on Friday, February 26th, 2021 at Ortmann Stipanovich Funeral Home from 9:30am-12:30pm (a limit of 25 people at a time) followed by funeral mass at St. Louis Abbey at St. Anselm Parish at 1:00pm. The family requests those who wish to express sympathy to consider making a donation to the MDS Foundation (Myelo-dysplasia Syndrome) or the Boy Scouts of America in the name of Robert G. McKelvey. Ortmann Stipanovich Funeral Home www.osfuneralhomes.com

Robert Gray McKelvey &#8220;Bob&#8221; of Town and Country, MO; Longboat Key, FL and Star Lake, WI passed away peacefully and in the love of Christ on Friday, February 19, 2021, at home in St. Louis. He was 92 years old. Bob was born on December... View Obituary & Service Information

The family of Robert "Bob" Gray McKelvey created this Life Tributes page to make it easy to share your memories.

Send flowers to the McKelvey family.