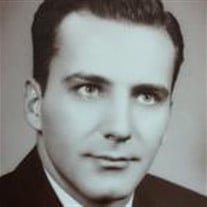 Barber, Ralph A. died on February 14, 2019 in St. Louis County. He was preceded in death by his wife of 62 years Joyce H. Barber (nee Haggard) and survived by his daughter Anne (Michael Patrick) Murphy of Webster Groves. Ralph graduated from Christian Brothers College High School in Memphis, TN and the University of Mississippi in Oxford, MS. He enjoyed a fulfilling career as an aeronautical engineer focused on the design and development of military aircraft. He retired from both General Dynamics-Ft. Worth Division and the McDonnell Douglas Corporation of St. Louis (now Boeing). During his career, he worked on such projects as B-58, F-15, F-16, and F-18a along with a few “top secret” projects. In addition to his passion for aircraft, Ralph loved classic vintage cars and enjoyed working on them. He liked making things, watching football, and reading about history, philosophy, and science. In retirement, Ralph volunteered as a math tutor in the Parkway School District Adult Education Program, served on the Town and Country Public Works and Storm Water Commission, and was a participating member of the Saint Louis Classical Guitar Society and the Gateway Harmonica Club. After the death of his wife Joyce in 2013, he moved from his home in Town and Country to the Ashford Condominium in Webster Groves, where neighbors enjoyed his harmonica playing during weekly Happy Hours. Ralph will be remembered for his gentleness, kindness, quiet sense of humor, curiosity, intellect, and ability to fix anything. His family thanks the doctors, nurses and other medical professionals at St. Luke’s Hospital who cared for him. Visitation Thursday, Feb. 21, 4:30-6:30 pm, followed by a Memorial Service at Bopp Chapel, 10610 Manchester Rd, Kirkwood, MO. In lieu of flowers, he asks that you enjoy the beauty of nature of which we are all a part, and celebrate the genius of humankind through its art, music, and literature.

Barber, Ralph A. died on February 14, 2019 in St. Louis County. He was preceded in death by his wife of 62 years Joyce H. Barber (nee Haggard) and survived by his daughter Anne (Michael Patrick) Murphy of Webster Groves. Ralph graduated from... View Obituary & Service Information

The family of Ralph A Barber created this Life Tributes page to make it easy to share your memories.

Send flowers to the Barber family.