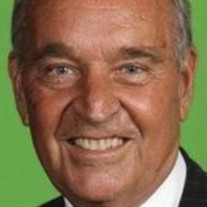 R. Jon Bopp (Retired Brigadier General US Army), on Friday, December 18, 2020 at the age of 81. Beloved life partner of Missie Nicholls; loving father of Tammy (Charles) Bopp Robinson (of Nashville, TN), Robert Bopp (of Orlando, FL), Carla Bopp Delanoix and Jeffrey (Ami) Bopp (of Fayettville, NC); dear grandfather, uncle, great uncle, cousin and friend of many. Jon was a life-time resident of St. Louis, graduate of Clayton High School and Westminster College. Jon then earned his law degree through Washington University. He served in the United States Army in the 27th Infantry Division in Vietnam. Jon enjoyed practicing law in Ballwin, Missouri where he also served as a three-term mayor for the City of Ballwin. Jon was currently a council member with the City of Wildwood. One of Jon’s favorite hobbies was being a member and past president of the Queeny Park Equestrian Events. Jon had a very keen interest in the entire West County area and volunteered a lot of his time with the West County Chamber of Commerce, where he served as Chairman for many terms. Jon’s animal enthusiasm included the Marlin Perkins Society at the St. Louis Zoo and the National Wild Turkey Federation. For his love of good barbeque, Jon was instrumental in bringing the St. Louis BBQ Society’s “BBQ Bash” to Wildwood, where it was held for many years. Everyone who had the pleasure to meet Jon, found him to be a very pleasant person and many became long-time friends – even those across the aisle in many court rooms. A Private Service will be held. Interment Bellerive Cemetery, Creve Coeur, Missouri. In lieu of flowers, memorial contributions greatly appreciated to The Queeny Park Equestrian Events, C/O Christina DeMauro, 2077 Waters Edge Court, Lake St. Louis, MO 63367

The family of R. Jon Bopp created this Life Tributes page to make it easy to share your memories.

Send flowers to the Bopp family.