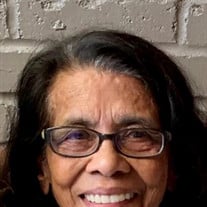 It is with extreme sadness that we announce the passing of Nafisa Kabir, 87, from St. Louis MO. She passed away on February 6, 2022 after a courageous battle with COVID-19. She was the wife of the late Dr. M.A. Kabir, MD. Nafisa was a bright spark in this world and will be deeply missed by many. Nafisa was born on February 25th 1934 to parents Habib Ullah and Sufia Khatoon in Noakhali under the Bengal Provinceduring British reign, now known as Feni, Bangladesh. She was the second oldest of five brothers and three sisters:Shahidullah Kaiser, a novelist and writer, Zahir Raihan a novelist, writer and filmmaker who were both martyred during the civil war in Bangladesh, Zakaria Habib, who was also a filmmaker and activist and followed in the older siblings footsteps, Dr. Suraiya Begum, Shahensha Begum, a teacher in NYC, Mohammed Obaidullah, and Mohammed Saifullah. As a student, Nafisa, along with her three brothers, was an activist during the 1952 Bengali language movement and the liberation movement. She graduated highschool in the top of her district with merit class. She graduated a valedictorian. She attended the London School of Economics where she obtained a double master’s degree in political science and economics. She was committed and worked tirelessly for the development of humanity, gender equality, good governance and democracy. She had a fierce work ethic and was an integral contributor to the family business, Centrec Care, a behavioral healthcarefacility, owned with her late husband and prominent psychiatrist,Mohammed A Kabir, MD. She was incredibly talented and wore many hats. Anyone who knew Nafisa was touched by her kindness, generosity and beautiful smile. She had a relentless devotion to physical fitness and personal development. She was an avid runner, taught yoga, aerobics and relaxation. She continued to workout at the gym six days a week until just before her COVID-19 diagnosis. She enjoyed reading, loved learning and was a die-hard St. Louis Blues Hockey fan. “Family…..Where life begins and love never ends.” One of the greatest joys in Nafisa’s life was being surrounded by her family. She nurtured a very close-knit family with her undying love and unwavering support. Even in her absence now, her loving energy is ever present. She is survived by her five children, Sylvia Kabir, Ivy Alwell (Brian), Connie Molenhour (Bob), Koly Parisi, Amyas Kabir (Kara) and ten grandchildren – Colleen Tilford (Jason), Shawn Fette (Jenny), Jason Molenhour (Tanesha), Brian McMahon, Derek Molenhour, Tim Alwell, Stephani Parisi, Ryan Alwell, Ashley Parisi, and Hailey Kabir; and seven great grandchildren – Kieran Tilford, Jolie Fette, Julian Tilford, Ahmon Nelson, Ayana Dolly, Milan Molenhour and Brielle Fette and numerous nieces and nephews. SERVICES:Visitation will be held Friday, February 11, 2022 from 5:00pm to 8:pm. The service will be held at 11:00 a.m.on Saturday, February 12, 2022. Both the visitation and service will be held at Ambruster Chapel, 6633 Clayton Road, St Louis, MO 63117.Interment will take place at Bellerive Gardens Cemetery following the service at 740 North Mason Road, St. Louis MO, 63141. In lieu of flowers, commit to incorporating a healthy habit into your lifestyle for 87 days honoring each year of her life. The Family would like to invite you to share photos and memories of Nafisa here on her Memorial page. Please submit your photos to [email protected] Arrangements by Ambruster Funeral Home.

It is with extreme sadness that we announce the passing of Nafisa Kabir, 87, from St. Louis MO. She passed away on February 6, 2022 after a courageous battle with COVID-19. She was the wife of the late Dr. M.A. Kabir, MD. Nafisa was a bright... View Obituary & Service Information

The family of Nafisa Kabir created this Life Tributes page to make it easy to share your memories.

It is with extreme sadness that we announce the passing of Nafisa...

Send flowers to the Kabir family.