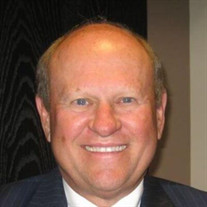 Michael Cliff Behan, 73, of St. Louis, MO, passed away Wednesday, December 22, 2021. Mike was born on April 11, 1948, in St. Louis, MO, the son of Verdie Behan and the late Clifford Behan. Mike is the beloved husband of Donna Behan; dear father of Laura (Kevin) Hewgley, Chris (Liz) Behan, Shawn Behan, and Kaitlin (Blake) Crawford; cherished grandfather of Madeline Hewgley, Hayden Hewgley, Braden Behan, Claire Behan, Emma Behan, and Chase Behan; treasured brother of Bill (Cathy) Behan, Jill (the late George) Ramsey, and Jack Behan; dear uncle of Beau Behan, Cody Behan, and Kelsey Ramsey. Mike Behan began his insurance career in 1971 with Royal Insurance Company. He joined Atlantic Mutual in 1974 and held a number of positions, including Regional Vice President in Chicago. In 1985 he joined Lawton-Byrne-Bruner, which was merged into Marsh & McLennan, where he was Senior Vice President until 1991. In 1991 Mike joined Huntleigh McGehee as a partner and Executive Vice President. He assumed his position as AHM Managing Director in 2007, and was actively the Client Advocate & Partner for AssuredPartners of Missouri. Mike graduated from the University of Missouri at Rolla with a BS in Mechanical Engineering and received an MS from the same school in 1975 in Management. He has held the designations of Chartered Property Casualty Underwriter (CPCU), Certified Insurance Professional (CIC), and Certified Safety Professional (CSP). Among many other industry titles held, Mike is past President of the St. Louis Insurance Agents Association and was their Insurance Person of the Year in 2000. Genuinely a bright light in the insurance industry, Mike was widely acknowledged among his peers as, among other superlatives, the consummate professional. His rare level of expertise was perhaps only matched by his innate sense of client service. It was evident that his clients were very much his partners. As a single criterion that speaks volumes, we could simply cite all the clients that had chosen to keep their business with Mike for 10, 20 years and beyond. Mike and Donna were married for over 32 years. They were best friends and deeply loved one another. They enjoyed traveling together, appreciating good restaurants, and cooking together at home. They created a beautiful life together full of fun and joy. Mike had a distinct laugh that anyone who knew him can remember. His laugh filled the whole room and was contagious to everyone who heard it. He always had a smile on his face, and a joke on his lips. He was a storyteller, and would draw the attention of a crowd. His stories were captivating and always ended with his exuberant laugh. Mike loved life, and lived it well. Whether it was duck hunting, playing golf, or sitting at the bar at Napoli 2, he appreciated his time with good company. If hard pressed to choose one adjective to describe Mike, it would be kind-hearted. He recognized kindness in those around him, and built up a large community of loving friends in doing so. Mike was adored and loved by all who knew him, and the feeling was mutual. Mike looked for ways to assist those around him. It brought him joy to offer a helping hand in any way he could. Mike will be dearly missed by all. The impact he made on those around him will never be forgotten. Service: The Visitation will be held at Schrader Funeral Home on Wednesday, December 29th from 4:00pm-8:00pm. The funeral will be held at Bonhomme Presbyterian Church on Thursday, December 30th at 10:00am. If desired, memorial contributions may be made to the Beta Alpha Education Foundation, details below: The Beta Alpha Education Foundation was formed in 2012 as a 501(c) (3) not for profit foundation for the benefit of educational facilities and scholarships to benefit Kappa Alpha fraternity at the Missouri University of Science and Technology which is known as the Beta Alpha chapter. Mike Behan was a big supporter of this foundation to provide funding to help support the renovation of the chapter house in 2014 to bring it up to modern standards. Memorial contributions in Mike’s name for either the building fund or for scholarships to the active chapter can be made to the Beta Alpha Education Foundation, PO Box 1884, Rolla, Mo 65402-1884, Attn: James Sowers, Treasurer. Your donations are tax deductible and will be acknowledged by a letter from the foundation.

The family of Michael Cliff Behan created this Life Tributes page to make it easy to share your memories.

Send flowers to the Behan family.