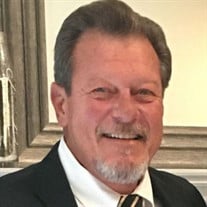 Kirkpatrick, Mark Allen, (65) passed away, Wednesday, March 11, 2020. Beloved husband of Denise Kirkpatrick (nee Miller); dearest father of Dustin Kirkpatrick, Jenna (Seth) Barrow and Shane Kirkpatrick; dear grandfather of Cooper and Dylan Kirkpatrick, Savannah and Kendall Barrow; loving son of Virginia and the late Ned Kirkpatrick, son-in-law of Guy and Delores Miller; brother of Barbara (Jim) Burk, Teresa Kirkpatrick, Ted Kirkpatrick and the late Larry and Hank Kirkpatrick; our dear brother-in-law, uncle, great-uncle, cousin and friend of many. Mark grew up in Wood River, IL. In 1972 he received a full scholarship to play football at the University of Missouri-Columbia. His greatest moment was in 1976 playing against Nebraska on national television and intercepting a pass from Vince Ferragamo which lead to a MIZZOU win. He met his wife, Denise in 1979 at a friend’s wedding. They married on September 12th, 1981. He recently retired as a financial advisor with Cornerstone Wealth Management. His love beyond his family and deep-rooted faith was spending time outdoors, especially when there was a full moon. He was known to many as Captain Kirk, he enjoyed boating, fishing and everything about being on the water. He loved football, coaching football, racing, jeep rides and spending time with his family. Denise and her children are extremely grateful for all the love and support of family and friends. Services: A private service will be held at SCHRADER Funeral Home and Crematory, 14960 Manchester Road at Holloway, Ballwin with a Celebration of Life to be held at a later date. In lieu of flowers, contributions may be made to Folds of Honor, American Heart Association or Ronald McDonald House. Friends may sign the family’s on-line guestbook at Schrader.com.

The family of Mark Allen Kirkpatrick created this Life Tributes page to make it easy to share your memories.

Send flowers to the Kirkpatrick family.