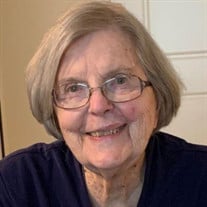 Louise Doris Schatz Born April 3, 1921 to George F. and Helen (nee Schumaker) Nordenholt, died August 23, 2020. She was the loving wife of the late Robert J. Schatz; loving mother of James of Northglenn, CO, Nancy Zaccagnino of Kinnelon, NJ, and Peggy Mayfield of Glendale, MO; grandmother of Lindsay Bennett (Shane), Logan Mayfield (Sarah), Randy Schatz (Nicki), Diana Schatzenpahl (Jason), and Michael and Jesse Zaccagnino; great-grandmother of James and Norah Mayfield, Ben and Norah Schatzenpahl, and Hadley Bennett. Her family brought her much joy and she showed great love and support at all times, generously sharing her time and talents with them. She was born in Bethlehem, Pennsylvania, and raised in New Jersey. She graduated from Cornell University in 1942 where she was a member of Delta Gamma Sorority, the university archery team, the Cornell orchestra, and the Women’s Glee Club, of which she was president. She met her husband of 64 years while at Cornell. Through his job with Monsanto they moved six times living in Massachusetts, Texas, Missouri, and Brussels, Belgium. Throughout her life she retained a deep love for music, studying violin as a child and performing two years in the New Jersey State High School Orchestra. Throughout their moves she always sang in church choirs as well as several symphony choruses including the Houston Symphony Chorus where she was honored to sing Bach’s Mass in b Minor with Leopold Stokowski conducting. At the time of her death she was a member of the Aberdeen Heights Choir, having sung in her last concert at age 98. She felt a deep commitment to give back to her community. While raising her children she was active in the community serving on the school board and as PTA president, and also participating in community theater. In 1972, she began her 32-year association with Midwestern Braille Volunteers where she brailled many a textbook and served as the teacher of braillists. When braille software was developed in the 1980’s she bought a computer and encouraged other braillists to do likewise. She was instrumental in forming the organization’s first Board of Directors, on which she served. She was an active volunteer and teacher there well into her 80’s. She considered her work with MBV the most rewarding of her activities and interests. She was a woman of deep faith. For almost 60 years she was a member of Bonhomme Presbyterian Church where she served as an Elder, as President of the Women’s Association, and in many other leadership positions. She was a soloist in the choir and at one time directed the Youth Choir. She was an active member of their quilting group; two of her needlepoint tapestries are on display in the chapel. She was an avid and excellent bridge player and played golf regularly for many years of her life. A life-long sewer, she took up quilting later in life. She enjoyed making quilts for her grandchildren and started a quilting group at Aberdeen Heights that made and donated lap quilts. Two years ago she joined a knitting group. She lived independently at Aberdeen Heights for almost nine years until July. She made many wonderful friends there and was loved by all. The family is appreciative of the wonderful care she received from the caretakers of Martha’s Hands and in AH’s Skilled Nursing. Services: She will be deeply missed by family and friends. A memorial celebration will be held on Saturday, June 19, 2021, 11:00 am at Bonhomme Presbyterian Church, 14820 Conway Rd. (63017). Those wishing to honor her may contribute to the to the Midwestern Braille Volunteers Tribute Fund, 104 W. Adams, 63122, in honor of Louise’s work with them. A service of the SCHRADER Funeral Home and Crematory.

The family of Louise Doris Schatz created this Life Tributes page to make it easy to share your memories.

Send flowers to the Schatz family.