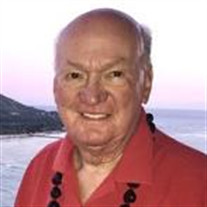 John Joseph “Jack" Quinn Jr., 80, passed peacefully, Tuesday, November 20, 2018, at his home in Scottsdale, Arizona, after a short battle with cancer. Loving husband of Judi Adams Quinn and the late Constance Elaine Quinn. Beloved father of Beth (Brent) Lee; Kay Quinn (Jim Malone); Connie (John) Dietrick; and John J. Quinn III (John Colborn). Proud grandfather of Ryan (Tage) Lee, Christina (Kyle) Guay, Derek Lee, Michelle (Isiah) Pasquale, and Diana Lee; Lauren and Katie Dietrick; Jimmy Malone; and his first great grandchild Winslow Quinn Lee. Dearest brother of Joan Quinlan, Robert Quinn, and Margo (Roland) Hemond. Proud in-law of the vast Adams family, including Lee (Eva); Larry (Mary Lou); Jerry (Julie); and Ruth (Don) Newton; of which he became an immediate and cherished member. Uncle, and friend to many in Scottsdale, St. Louis, and Vancouver, British Columbia, Canada. Jack was a sports executive and a master negotiator with 40 years in professional sports, and a member of one of professional baseball’s most prominent multi-generational families. He was the grandson of James Aloysius “Bob” Quinn, a baseball man for 60 years starting as a player in the 1880s, although he never made the majors. In the 1920s, Bob owned the Boston Red Sox. Jack’s father John was the general manager of the Milwaukee Braves when they won the World Series in 1957. Jack began his own career in baseball as general manager of the Midland, Texas, Braves; the Davenport, Iowa, Braves; and The San Jose Bees. He was named executive of the year during his 12 year tenure as general manager of the Triple-A Pacific Coast League Hawaii Islanders baseball team in Honolulu, HI. Jack was also general manager of the Triple-A Vancouver Canadians baseball team in Vancouver, British Columbia, Canada. In 1983, he was named president of the St. Louis Blues of the National Hockey League, a sport he loved as much as his beloved baseball. He continued to watch, cheer, and offer opinions about his St. Louis Blues until the day he died. His career took him around the world. He loved each of the cities he adopted as his home throughout his career, and kept up many long-distance friendships until his death. But his first love was always his family. Along with sports, he cherished spending time with family and friends, golf, and travel. Funeral mass Wednesday, November 28, at 10 a.m., at the Franciscan Renewal Center, 5802 E. Lincoln Drive, Paradise Valley, Arizona, 85253. Visitation in the sanctuary at 9:30 a.m. Jack will be laid to rest following a short prayer service Saturday, December 1, at 11 a.m., in the mausoleum at Bellerive Gardens Cemetery, 740 N. Mason Road, St. Louis, Missouri, 63141. In lieu of flowers, memorial donations may be made to Hospice Promise, 12213 W. Bell Road, Ste 115, Surprise, Arizona, 85378, or a hospice service of your choice. Arrangements by Bopp Chapel.

The family of John Joseph "Jack" Quinn Jr. created this Life Tributes page to make it easy to share your memories.

Send flowers to the Quinn family.