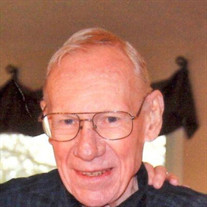 John M. Wiese “Jack” 1929 - 2022 Passed away at age 92, January 6, 2022. He was the only child of Dr. Harry and Aimee Wiese. He was preceded in death by his wife of 60 years, Salle Whittington Wiese in 2012. He is survived by his two children; Sandy (Dan) Gartland and Scott (the late Donna McFarland) Wiese. Jack is grandfather to Kelly (Thierry) Brunel, Jenny (Kyle) Shaffer, Matthew (Beth) Buck, Brett (Jessie) Wiese, Beth Wiese and eight great grandchildren. Jack grew up in St. Louis and graduated from Culver Military Academy. He then attended college at Wesleyan University in Middletown, CT, earning a degree in Chemistry and was fraternity president of Beta Theta Pi. He was an army veteran and served in the radio communication corps in the Korean War and was stationed in Tokyo, post war. Upon returning to St. Louis after the war, he pursued his desire for technical training and received two engineering degrees for Civil and Mechanical Engineering at Washington University, graduating Summa Cum Laude. Jack’s first job was plant engineer with AFCO, American Furnace Company in Red Bud, IL. Little did he know, that he would continue to be promoted through three company buyouts, Singer Co., Snyder General Corp., Inter-City Products Corp., and spend his entire career with the same organization, rising to Vice President of Advanced Engineering. He was an integral part in leading his engineering team with the development of the revolutionary RPJ /RPJII Heat Exchanger alleviating leaks at welded seams that could cause danger to the public and were produced using continuous feed coil. He also developed several patents that were widely used in the industry. Upon retiring, he started his own engineering consulting business and also, played a key role in recruiting new businesses to the Red Bud community. He always had a love for the outdoors, northern Canadian fishing trips, quail hunting, competing in field trials with his wife, Salle, their English Setters and horses. One of his favorite passions was boating and skiing at Table Rock Lake that he did with his family up until his final days. Jack was a man of high integrity, discipline and leadership. He will be greatly missed. Services: Funeral service at the SCHRADER Funeral Home and Crematory, 14960 Manchester Road at Holloway, Ballwin, Saturday, January 8, 2022 at 11:30 a.m. Interment Bellerive Gardens. If desired, contributions may be made to the Alzheimer's Association. Visitation, Saturday 9:30 a.m. until time of service. Per family's wishes, everyone is REQUIRED to wear a mask. Friends may sign the family’s on-line guestbook at Schrader.com.

The family of John "Jack" M. Wiese created this Life Tributes page to make it easy to share your memories.

Send flowers to the Wiese family.