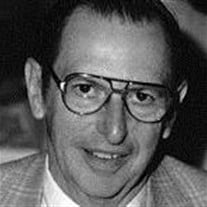 Anderson, John Welrose, died surrounded by family on September 10, 2017 at the age of 97 years. He is survived by his wife of 65 years, Renate (Noxon) Anderson, three of his four children; Margaret R. Anderson of Chesterfield, Missouri; Marie (Anderson) Smith and her husband, Jeffery B. Smith of Bellaire, Michigan; and William R. Anderson and his wife, Cynthia M. Anderson of Overland Park, Kansas. He was predeceased by his son, John N. Anderson, who is survived by his wife, Stephanie B. Anderson of Grapevine, Texas. He was also “granddaddy” to 8 boys and 2 girls, and “great-granddaddy” of 1 girl. He was the son of Arthur M. and Lorene D. Anderson of Sparta, Illinois and he was predeceased by his two brothers, Colonel Arthur W. Anderson (born 1918, died 2015) and James H. Anderson (died March 1945). John was born in St. Louis, Missouri, and raised in Sparta, Illinois. He attended the University of Illinois and the University of Michigan, culminating in a Masters of Engineering in Aeronautical Engineering. His education was interrupted by his military service during World War II, during which he served in the Army Air Corps, training as a navigator and bombardier. He enjoyed a long career in aviation, with over 30 years working on projects at McDonnell-Douglas, including the Mercury and Gemini programs, and multiple fighter aircraft projects. He had the thrill of meeting many aviation luminaries, including multiple astronauts, the Hunter brothers, and Charles Lindbergh. His passion for aviation was life long, and he flew his own Cessna airplane until age 92. He was an avid St. Louis Cardinals fan, and golfer. He loved to travel, especially in the western United States. The last two years of his life were spent in the loving care of the staff at Mari de Villa Retirement Center. He was a man of few words, which were often well chosen and wise. His greatest passion was his family to whom he was totally devoted. Visitation will be at Bopp Chapel, 10610 Manchester Road, Kirkwood, Missouri 63122 on Saturday, September 16, 2017 from 9:30 AM to 11 AM. In lieu of flowers, the family respectfully requests donations be offered to Wings of Hope.

Anderson, John Welrose, died surrounded by family on September 10, 2017 at the age of 97 years. He is survived by his wife of 65 years, Renate (Noxon) Anderson, three of his four children; Margaret R. Anderson of Chesterfield, Missouri; Marie... View Obituary & Service Information

The family of John Welrose Anderson created this Life Tributes page to make it easy to share your memories.

Send flowers to the Anderson family.