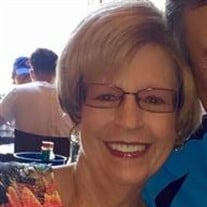 Janet Marlene St. Onge, age 68, passed away on August 13, 2017 at her home in Town and Country, MO after a seven and a half year courageous battle with stage 4 cancer. Jan was born in Marquette, MI, the daughter of Sadie Hill St. Onge and Arthur David St. Onge. She graduated as the valedictorian of class from Bishop Baraga High School in 1967. She moved to St. Louis to attend Fontbonne University and graduated magna cum laude in 1971. She became a sister of St. Joseph of Carondelet where she remained for 20 years. During this time she had a variety of jobs. She taught English and Theology at St. Joseph’s Academy and is still beloved by her former students. She entered the field of chemical dependency, eventually serving as the Director at St. Joseph’s Hospital in Kirkwood. Later she became Director of Administrative Services for the St. Louis province. In 1985 she began attending the Washington University Executive MBA program, graduating in 1987. She left the community on good terms and became the Executive Director of the St. Louis Regional Maternal and Child Health Council. On April 23, 1989 she married Daniel Grossman, who she first met at the Washington University EMBA program. On December 3, 1991, she gave birth to a son, Nicholas and on June 13, 1996 to twins Kathryn and Thomas (on her 47th birthday). She retired from work after the birth of the twins and dedicated the rest of her life to her family especially enjoying the school and extracurricular activities of the children. She was preceded in death by her parents and her dearest Bichon, Curly. She is survived by her husband, Daniel Theodore Grossman; her children, Nicholas St. Onge Grossman, Kathryn St. Onge Grossman and Thomas St. Onge Grossman; her sister Judith St. Onge and her husband Barry Hedblom. She was a much beloved aunt, great aunt, great great aunt, niece, cousin and friend. Services: Visitation at the ORTMANN STIPANOVICH Funeral Home, 12444 Olive Blvd., Creve Coeur, Tues., Aug. 15, 3-8 p.m. Mass of the Resurrection will be held at Our Lady of the Pillar Church, 401 S. Lindbergh Blvd., Creve Coeur, Wed., Aug. 16 at 10 a.m. Interment Bellerive Gardens Cemetery.

Janet Marlene St. Onge, age 68, passed away on August 13, 2017 at her home in Town and Country, MO after a seven and a half year courageous battle with stage 4 cancer. Jan was born in Marquette, MI, the daughter of Sadie Hill St. Onge and Arthur... View Obituary & Service Information

The family of Janet Marlene St. Onge created this Life Tributes page to make it easy to share your memories.