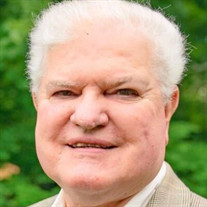 James (Jim) Jacob Butler, age 79, passed away peacefully on February 14, 2021, after bravely battling many health issues. Jim was born on July 8, 1941, to the late Jim and Dorothy Butler and grew up in north St. Louis. He was the oldest of seven children, John, Joe, Tom, Joanne, Kathy and Jerry. Jim attended Christian Brothers High School and loved playing on the varsity basketball and baseball teams. In 1959, as a senior, he played on CBC’s basketball team when it won its first state championship. He was also the pitcher for the Cadet’s baseball team. The highlight of his baseball career was pitching a no hitter against rival McBride High School as a senior. Jim received a full athletic scholarship to St. Louis University playing baseball. Jim was a pitcher on SLU’s baseball team from 1959-1963. As a senior, his team was the first ever in SLU’s history to win the Missouri Valley Conference. Jim pitched the championship game in Old Sportsman’s Park. Jim then pitched SLU’s first NCAA tournament victory, beating Mizzou 2-1. In 1963, he was named All Conference Pitcher and received his B.S. in Business. Jim was a staunch supporter of the athletic programs at both CBC and SLU. He helped fund new turf for CBC’s football field and SLU’s baseball field. In 2018, Jim was inducted into SLU’s Baseball Hall of Fame and, in 2020, he was inducted in the CBC Alumni Hall of Fame. In 1974, Jim received a Master’s Degree in Business Administration from Indiana Northern University. Jim began his professional career in various executive positions for multiple manufacturing companies based out of state. In 1979, Jim returned to St. Louis to purchase a Chevrolet dealership in Crestwood, Missouri, with his father. Over the years, the business grew and expanded to include multiple Saturn dealerships and a Kia dealership. The Chevrolet dealership in Fenton, Missouri grew to be one of the largest in the United States. In 1986, Jim became one of 16 Chevrolet dealers who created the sales and service program for Saturn, a new automotive brand at that time. In the 1990’s, Jim was elected to the Chevrolet National Dealer’s Council by his fellow Chevrolet dealers. In 1995, Jim was elected President of the Chevrolet National Dealer’s Council. From 1997-1998, Jim attended General Motors Board meetings as a dealer representative. In 1998, he found his true calling as a Board member of the Boys and Girls Clubs of Greater St. Louis (BGCSTL), whose mission is to inspire and enable all young people, especially those who live in poverty, to reach their full potential as productive, responsible and caring citizens. The BGCSTL provides after-school, teen, sports and summer programs to St. Louis-area youth while providing a safe place for children to learn and grow. In 1998, as a member of the BGCSTL’s Resource and Development Committee, Jim founded the annual Jim Butler Charity Golf Tournament, which has raised approximately $5,000,000 over the last 20 years for the BGCSTL. In 2017, after more than 25 years as a Board member, Jim became a Lifetime Trustee of the BGCSTL. Jim loved and supported his family. He is survived by his wife of 18 years, Janet Lynn Butler. He is also survived by his three children, Michele Sowers (Brad) and grandchildren Jacob and Chloe; Jacqueline Dunne (Nick) and grandchildren Sam and Pierce; and Jim Butler (Dani) and grandchildren Kaitlyn and Madelyn. He is also survived by his mother-in-law, Betty Spieler, and two stepchildren, Jason Huddleston (Bethany) and grandchildren Hannah, Jack and Madison and Lora Headrick and grandchildren Grant and Drake. Services: Jim believed in Jesus Christ as his Lord and Savior and was a member of King of Kings Church, where the family will have a private family-only service on Saturday, February 20. In lieu of flowers, donations may be made to the Boys & Girls Clubs of Greater St. Louis, Resource Development Department, 2901 N. Grand Blvd., St. Louis, MO 63107, https://www.bgcstl.org/donate/ or King of Kings Lutheran Church, 13765 Olive Blvd., Chesterfield, MO 63017. A service of the SCHRADER Funeral Home and Crematory. Friends may sign the family's on-line guestbook at Schrader.com. The Service will be live streamed at 11:00 a.m. Please join here: www.kokstl.org/livestream. Arrangements by Schrader Funeral Home.

James (Jim) Jacob Butler, age 79, passed away peacefully on February 14, 2021, after bravely battling many health issues. Jim was born on July 8, 1941, to the late Jim and Dorothy Butler and grew up in north St. Louis. He was the oldest of seven... View Obituary & Service Information

The family of James (Jim) Jacob Butler created this Life Tributes page to make it easy to share your memories.

Send flowers to the Butler family.