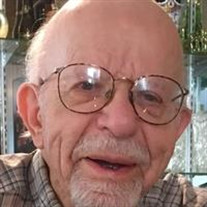 Muccini, Giuseppe Antonio “Joe”, passed away in Chesterfield, Missouri, on August 28, 2018, in the early morning hours, following the anniversary of the death of his beloved sister, Maria Pinto née Muccini. He was also preceded in death by his parents, Nicola Muccini and Elvira Muccini née Mastrangelo. He is survived by his wife Vincenzina “Vinnie” Muccini née DiStefano and his sons Joseph and Nicholas Muccini. He was born in Oratino, Italy, on March 2, 1933, and came to the United States, arriving at Ellis Island as a student at the age of 17 in 1950, with pocket money and a suitcase, not knowing if he would see his family again after that. (He did, as often as possible, becoming the heart of the family, and its patriarch.) His early education included study at Case Institute of Technology (now Case Western Reserve), earning his undergraduate degree from Niagara University, and earning a Masters Degree in chemistry from Notre Dame. He became a physical chemist, and worked in various capacities as a research scientist at Melpar and the Mellon Institute, as a consultant for NASA, as a food chemist for General Mills, and finally at Ashland, Inc, where he ultimately became a corporate Vice President. In retirement he worked as a consultant and he was dedicated to efforts at environmental protection and environmental cleanup. Even as a captain of industry he felt that, “We all live on this little blue ball together, and we and our children all drink the same water.” He spent his life helping others, even unto his last days, worried about the well-being and care of both immediate and extended family members. He was father, husband, brother, son, uncle, nephew, mentor, patriarch, and champion of everyone he loved and everyone who loved him. He was a builder of confidence, a counselor to the confused, a comforter of the sufferer, a solver of problems, a seeker of truth, an adversary of corruption, a promoter of fairness, and a fighter for justice. He was an ethical touchstone for all who knew him and whose lives he touched. He was an intellectual giant, with a soft, generous heart, and a kind, loving soul. He will be dearly missed and forever remembered by every member of his family, who can only hope to live by his example. He was a Renaissance Man. He was our hero. Services: Funeral from the SCHRADER Funeral Home and Crematory, 14960 Manchester Road at Holloway, Ballwin, Tuesday, 9:30 a.m. to Incarnate Word Catholic Church, Chesterfield for 10:00 a.m. Mass. Interment Bellerive Gardens. The family asks that in lieu of flowers and gifts that contributions be made in his name to St. Luke’s Hospital in Chesterfield, MO, where he was cared for during the last 45 days of his life, and where his two sons continue to work to help others. The website for donations is St. Luke's Hospital () . Visitation Sunday 4-8 p.m. and Monday 4-8 p.m. Friends may sign the family’s on-line guestbook at Schrader.com.

Muccini, Giuseppe Antonio &#8220;Joe&#8221;, passed away in Chesterfield, Missouri, on August 28, 2018, in the early morning hours, following the anniversary of the death of his beloved sister, Maria Pinto née Muccini. He was also preceded in... View Obituary & Service Information

The family of Giuseppe "Joe" Antonio Muccini created this Life Tributes page to make it easy to share your memories.

Send flowers to the Muccini family.