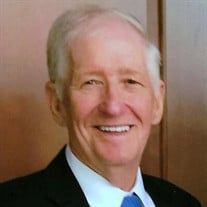 Ramsey, George R. passed away Wednesday, January 27, 2021, at the age of 82. Beloved husband of Jill Ramsey (nee Behan) for 31 years; cherished father of Kelsey Dakota Ramsey and Kim (Tim) Lindsey; loving grandfather of Colton and Rose Lindsey; favorite son-in-law of Verdie Behan; dear brother-in-law of Mike (Donna) Behan, Bill (Cathy) Behan and Jack Behan; wonderful uncle and great-uncle; and loyal friend to so many. George was the only son of the late Iva Ramsey Sisk and late George C. Ramsey. He grew up in West Fork, Arkansas, and earned his Bachelor’s and Master’s Degrees from Northeastern State University in Tahlequah, Oklahoma. He began his 40+ year career as an educator as Lead Teacher/Principal in Olathe, Kansas. In 1969, George followed his mentor, Dr. Wayne Fick, to the Parkway School District in St. Louis County, Missouri. He opened Hanna Woods Elementary School as Principal in 1970 where he spent 11 years. George was asked to become Principal of Mason Ridge Elementary School in 1981, following the retirement of the late Virgil Schulz and spent 21 years there until his retirement in 2002. Mason Ridge earned the National Blue Ribbon School of Excellence Award in 1985-86, the nation’s highest educational honor. George’s life was a beautiful gift to each and every person he touched. He made a difference in the world; positively impacting the children he championed and teachers he guided, enriching lives for years to come. He touched so many with his kindness, gentleness, caring nature, and sense of humor. He was a compassionate, loving father to Kelsey Dakota and Kim and devoted husband to Jill. His love will continue to surround them as his memory lives on forever. Services: Due to the Covid-19 Pandemic, the funeral service will be private at the SCHRADER Funeral Home and Crematory, 14960 Manchester Road, Ballwin, Saturday, February 6th at 11:30 a.m. The service will be live streamed available through a link at the Schrader Funeral Home website. Private Interment at Bellerive Gardens. A Celebration of Life will be held at a later time. In lieu of flowers, contributions may be made to the George Ramsey Memorial Fund, c/o Mason Ridge Elementary School, 715 S. Mason Rd., Town and Country, MO 63141. Friends may sign the family’s on-line guestbook at Schrader.com.

The family of George R. Ramsey created this Life Tributes page to make it easy to share your memories.

Send flowers to the Ramsey family.