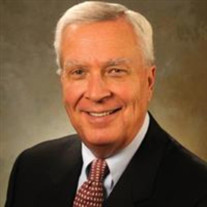 Eugene “Gene” Toombs, 79, died Saturday, September 26, 2020. He called both St. Louis, MO and Longboat Key, FL home. He is survived by his loving wife of 57 years, Judith (Choborda) Toombs; his son, Eugene (Lynn) Toombs IV; and two grandchildren, Alexandra and Graham. He was predeceased by his sister, Patricia Woods. Born September 25, 1941 in New Jersey, he was the son of Eugene Toombs, Jr. and Dorothy (Croghan) Toombs. He graduated from Irvington High School in 1959 and Fairleigh Dickinson University in 1963 with a bachelor’s degree in business management. Gene and Judy were married in 1963 after dating since high school. After the wedding, he served in the National Guard at Fort Ord in California. After his service, career stops included Fluid Chemical, American Can, Boise Cascade, and Sonoco Products. In 1970, business opportunities relocated Gene and Judy to St. Louis. In 1975, while at Boise Cascade, Gene earned an Executive Education degree from Harvard Business School. In 1989, Gene joined MiTek Industries, as Vice President and President of a major division. He became Chairman, President, and CEO shortly after, and led the company through rapid growth. Gene and his team consummated 37 acquisitions, which tripled the size of the company. By his own admission, the highlight of his career was orchestrating the 2001 sale of the company to Warren Buffett’s Berkshire Hathaway, Inc. from Rexam PLC. Gene retired in 2012 as Chairman Emeritus, after earning a lifelong reputation as a master salesman, leader, mentor, and friend to many in his career. Gene strongly believed in giving back to causes he believed in. He chaired the boards of St. Luke’s Hospital, Junior Achievement, and the St. Louis Science Center. He also served as a trustee for Webster University and the Missouri Botanical Garden. In addition, he was a director for the Central Institute for the Deaf, the Regional Business Council, and was a member of the President’s Council for The Magic House in St. Louis. He was honored with the Great Friend to Kids Award from The Magic House in 2015 and the Gold Leadership Award from Junior Achievement USA in 2016. He also served as a corporate director for Auto Club Enterprises (AAA), St. Louis Trust Company, and Duke Manufacturing. An avid golfer, Gene treasured the many friendships on the 19th hole as much as the competition itself. He was a long-time member at the Bogey Golf Club, St. Louis Country Club, and Longboat Key Club in Longboat Key, Florida. Visitation at the Ortmann Stipanovich Funeral Home, 12444 Olive Blvd., Creve Coeur, Sunday. October 4 from 4-8 PM. Private memorial service and interment on October 5. In lieu of flowers, the family asks that you consider donations to St. Luke’s Hospital, The Magic House, or Central Institute for the Deaf.

The family of Eugene "Gene" M. Toombs III created this Life Tributes page to make it easy to share your memories.

Send flowers to the Toombs family.