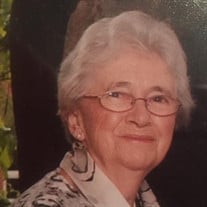 Ernestine "Erna" Burbach, 89, died on July 6, 2018 at Burlingame Sunrise in the California Bay Area from Parkinson's disease, following a lengthy illness. She is predeceased by her husband, Fritz Burbach, (2001). She leaves her daughter, Herta B. Feely and her husband, Jim Feely; her son, Gary Burbach, and his fiancee, Kathy Miscoll; six grandchildren, Max and Jack Feely, Alex, Kyle, Eric and Peter Burbach; her brother, Richard Weimann, and his wife, Linde, her nephews, Gunther and Herbert Weimann; her sister, Rosl; many other nephews, nieces and family members; and also many close friends. Erna was born in Vrbas, Yugoslavia, fled to southern Germany in 1954 (with Fritz and Herta), then emigrated to the United States in 1958, when she was 29 and didn't speak a word of English. She lived in St. Louis from the time she arrived in the US until June 2017, when her illness worsened. Perhaps best known as a generous friend and hostess, she was a prodigious baker whipping up European delicacies as readily as American pies, cakes and cookies. At Christmas each year, she distributed dozens of German-style cookies to friends, family, and even her doctors. She will also be remembered as a wonderful cook, and in her later years as an avid Rummikub player. She worked hard much of her life, alongside her dear Fritz, a tailor, and also at Parkway High School for many years; she loved to throw a party; was a terrific dancer (waltz and polka); and she was devoted to and enjoyed traveling to see her children and grandchildren, but also made many trips back to her native Europe to visit with family. She may have been small (five feet) but left an impression wherever she went and will be missed by many. Service: August 11, 2018 1:15 pm (Mausoleum) Bellerive Gardens Cemetery 740 N. Mason Road Creve Coeur, MO 63141

Ernestine "Erna" Burbach, 89, died on July 6, 2018 at Burlingame Sunrise in the California Bay Area from Parkinson's disease, following a lengthy illness. She is predeceased by her husband, Fritz Burbach, (2001). She leaves her daughter, Herta... View Obituary & Service Information

The family of Ernestine "Erna" Burbach created this Life Tributes page to make it easy to share your memories.

Send flowers to the Burbach family.