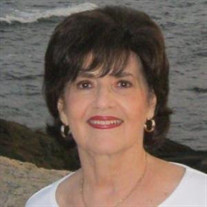 In Memory of Wood, Ellen "Evie" Green February 9, 1938 - June 28, 2021 Obituary Died on June 28th at the age of 83. She was born in St. Louis in 1938 to Adam and Edna Rosenthal. She is survived by her loving children, Bart Mese (Linda) Green, Jr. and Julie Alice (Bill) Lawson and her grandchildren, Danielle Green, Brittany Green and Joey Lawson. Beloved sister of the late Richard (Rosemary) Rosenthal and their children Rosalie (Chris) Ryan and Mary (Bridget Davis) Rosenthal. Evie graduated from University City High School and the University of Colorado – Boulder. She received her doctorate in educational psychology from St. Louis University and was an adjunct professor of psychology at St. Louis Community College at Meramec. She also taught in the clinical experiences program in education at Washington University and the University of Missouri-St. Louis. In addition to her teaching, she developed and taught seminars on critical thinking. She received the Telecourse Pioneer Award from 1982 through 1988 for her contributions to the field of distance learning. The professional accomplishment Evie was most proud of was writing one of the best-selling college general psychology textbooks in the country, The World of Psychology, with her former husband Samuel E. Wood. From 1993 until 2019, there were seven editions published in the United States, nine in Canada, as well as international editions. Evie’s passions in life were family, travel, art and education. She instilled these values in her children and grandchildren. She provided so many wonderful memories, taking her family on trips around the world. Most of all she was a wonderful, caring person. Funeral service Wednesday, June 30, 10:30 AM at Congregation Shaare Emeth, 11645 Ladue Road with visitation at 10 AM until time of service. Interment private. Donations in memory of Evie may be made to the Alzheimer’s Association, 9370 Olive Blvd., St. Louis, MO, 63132 or to The Harvey Kornblum Jewish Food Pantry, 10950 Schuetz Road, St. Louis, MO, 63146. Shiva Information: The family will observe Shiva at the Lawson Residence, 2114 Riding Trail Drive, Chesterfield, MO, 63005 on Wednesday, June 30 from 4:00pm to 8:00pm.

The family of Ellen "Evie" Green Wood created this Life Tributes page to make it easy to share your memories.

Send flowers to the Wood family.