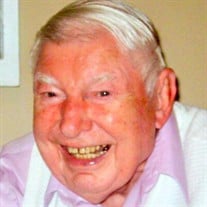 Earl George Crenshaw passed away peacefully on Saturday, April 25 2020. Earl was always strong and quite a fighter through each of life’s challenges for 99 years. When he contracted Coronavirus that took more than he had to give. Earl was born early Sunday morning on March 21, 1921 at his home in Crenshaw Crossings near Marion Illinois. His parents were George & Anna Crenshaw. Earl grew up in this home and graduated from Herrin High School. In 1942, after the bombing of Pearl Harbor Earl enlisted in the Army Air Corps. Earl faithfully served his country until the end of World War II. After the war Earl moved to St. Louis Missouri. He began working for Western Electric in 1946. In 1948 Earl was offered a company transfer to Dallas, Texas. At that time Earl was dating Imogene (Jean) Kuethe. They decided this transfer was a good reason to get married. Earl & Jean had three children Ken, Debbie & Kathy while living in Texas. In 1968 Earl received another company transfer to move back to Missouri. Earl and his family moved to Manchester Missouri. While living in Manchester Earl was an active member of Trinity Lutheran Church. Earl was married to Jean until she lost her battle to cancer in 1974. Earl continued to work for Western Electric for 34 ½ years until his retirement in 1981. In 1978 Earl married Clare Kuehne. Clare had four grown daughters Barbara, Bonnie, Pat & Kathy. This union was one of Earl’s great discoveries. Earl loved Clare’s family as his own. Earl & Clare enjoyed playing bridge, dancing, going to Cardinal games and traveling the world together. Eventually they moved to Meramec Bluffs where they lived happily together until Clare’s passing in 2007. Earl continued to live at Meramec Bluffs. Earl made many great friends while living there. Evelyn Gleason was Earl’s special companion from Meramec Bluffs who preceded him in death in 2016. Evelyn and Earl were a hard team to beat in a game of bridge, shuffleboard or trivia. Earl was loving father to Ken Crenshaw (Rebecca), late Debbie Toney (Mike), Kathy Patterson (Scott), Barbara Madaras (late Jack Phipps), Bonnie O’Brien (Mike), Pat Lindsey (Dave), Kathy Cunningham (Gene). Beloved grandfather to Kim Boyles (Josh), Bryan Toney (Lauren), Clayton Toney (Anjanae), Ken Patterson (Suzi), Mary Harrison (John), Wil Madaras, Steve Madaras (Crystal), Tim O’Brien (Jenny), Dan O’Brien (Beth), Erin Wright (John), Julie Te (Drano), Mark Lindsay (Kim), Bonnie Douglas (Scott), Kevin Cunningham & Nic Cunningham. Dear great-grandfather, brother-in-law, uncle, cousin and friend to many. Earl is now at peace and with his Lord and Savior in Heaven. Services: A celebration of Earl’s life will be held at a later date when restrictions are lifted due to COVID-19. In lieu of flowers please consider a donation to American Cancer Society. A service of the SCHRADER Funeral Home and Crematory. Friends may sign the family's on-line guestbook at Schrader.com.

Earl George Crenshaw passed away peacefully on Saturday, April 25 2020. Earl was always strong and quite a fighter through each of life&#8217;s challenges for 99 years. When he contracted Coronavirus that took more than he had to give. Earl... View Obituary & Service Information

The family of Earl George Crenshaw created this Life Tributes page to make it easy to share your memories.

Send flowers to the Crenshaw family.