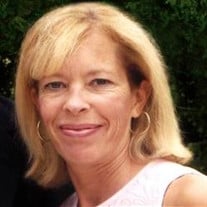 Kella, Deborah "Debbie" M. (nee Gilpin) Saturday, February 9, 2019. Beloved wife of Dr. Timothy Kella; beloved mother of Michael, Matthew and Patrick Kella; beloved daughter of the late Harold and Mary Patricia Gilpin (nee Bradley); beloved sister of Gail (Henry) Dyn, Pamela (Robert) Worley, John (Karen) Gilpin and Timothy (Julie) Gilpin; beloved sister-in-law, cousin, aunt, great-aunt, and friend to many. Debbie cherished her time growing up with her two sisters, two brothers, and parents in Elmhurst, Illinois where she attended Immaculate Conception High School with many good friends. Debbie graduated from Fontbonne University in St. Louis, Missouri, where she met her husband Tim during that time, before embarking on a career in the fashion industry. Debbie later became a full time mother when her first son was born. Debbie's husband and children were everything to her. She encouraged them to follow their passions and relentlessly supported them in all aspects of their lives. Debbie was dedicated to volunteering as a parishoner at Ascension Catholic Church in Chesterfield, Missouri, where her children attended grade school. She cherished a shared interest with her sons in tennis, as well as with many close friends. Debbie found happiness in the time she spent with family and friends and in the impact she had on their lives. Debbie is also remembered, among many things, for her faith, humor, joyful spirit and the importance she placed in the family that she cultivated. She listened without judgement, was strong in her beliefs and was genuinely interested in others. In lieu of flowers, the family has requested donations to the Siteman Cancer Center - Gynecologic Oncology Research. Donations can be made online at friendsofsiteman.wustl.edu (please specify Deborah Kella as the designation for donation) or by mail to Siteman Development Office: 7425 Forsyth Blvd., CB 1204, St. Louis, Mo. 63105 Visitation Saturday, February 23, 2019 9:00 A.M. until time of Mass 10:00 A.M. at Ascension Catholic Church, 230 Santa Maria Dr. Chesterfield, Mo. 63005. Burial to follow Mass The visitation and Mass are in celebration of the lives of Debbie and her mother, Mary Patricia Gilpin, whose death preceded hers on February 6, 2019.

The family of Deborah M. Kella created this Life Tributes page to make it easy to share your memories.

Send flowers to the Kella family.