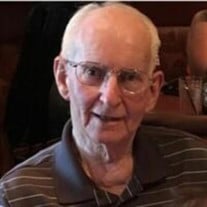 Smith, Charles Formwalt of Chesterfield passed away, Monday, December 14, 2020, at the age of 97. Dearest father of Charles F. (Ann) Smith, Jr., Kimberly Barberio, and Shelley (David) Dressel; proud grandfather of Margaret Smith, Charles (Jenny) and Christina Barberio; Allison, Claire and Grace Dressel; great-grandfather of Keegan, Camille and Cohen. He was preceded in death by his beloved wife Anne C. Smith, parents A. Hale and Marie Smith, brother, Alexander H. (Betty) Smith and sister, Marie (William) Hammond. Dear uncle and friend. While Charles lived in St. Louis for over 50 years, Birmingham, Alabama would always be home. He was a proud Auburn University graduate and enlisted in the R.O.T.C. while a freshman there. He served in the Air Force as a B-29 bomber pilot during World War II and was recalled during the Korean War. Major Smith retired from active duty in 1952 and went on to a long career in sales, first in building products and later in real-estate, which brought him joy and kept him busy well into his 90s. Charlie loved Auburn football, telling stories, and time spent with family. He exemplified the values of The Greatest Generation and was a true southern gentleman. Services: PRIVATE Graveside service at Bellerive Gardens. In lieu of flowers, contributions can be made to the Auburn University Foundation, 317 College St., Auburn AL 36849 with note “for St. Louis Auburn Club Endowment in Memory of Charles Smith ’48” or Greater St. Louis Honor Flight gslhonorflight.com. A service of the SCHRADER Funeral Home and Crematory. Friends may sign the family's on-line guestbook at Schrader.com.

The family of Charles F. Smith created this Life Tributes page to make it easy to share your memories.

Send flowers to the Smith family.