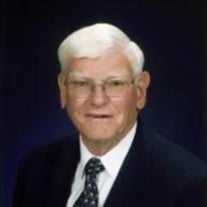 Arthur C. Schrieber, Jr. (Art), received by the Lord Wednesday, November 11, 2020. Beloved husband of the late Sandra Schrieber (nee Keiser); father of Keith (Joyce) Schrieber, Melissa (John) Miller, and Chad (Kelly) Schrieber. Preceded in death by his parents Arthur and Lillian, his brothers William and Robert, his sisters Jean (Grebel) and Lois (Johnson), and his half-brother Arthur. Dear grandfather of Andrew Miller, Samantha Miller, Jacob (Mary Kay) Gleim, C.J. Schrieber, and Andrea Schrieber. Dear great grandfather of Megan and Luke. Our dear uncle, great uncle, cousin, and friend. Art was born in 1932 in St. Louis, MO, the fifth of five children. One of his earliest memories that he shared was when he and his father would track the reports about troop movements in Europe during World War II. His father died from heart disease near the end of the war. Art attended Roosevelt High School, and then Western Military Academy in Alton, IL, at the encouragement of his aunt, Mayabelle, who was concerned he was on a bad path. Upon graduation, he was accepted into Washington University, and attended for 2 years. He was drafted into the Army, and enlisted early. Upon his Honorable Discharge from the Army, he returned to Washington University, and completed his degree in Business Administration in 1956. He married Nancy Schwarz in 1963, and his daughter, Melissa, was born in 1965. He was divorced in 1966. In 1968, he met and married Sandra Keiser, adopting her son, Keith. In 1970, Art and Sandy had a son, Chad. They remained married until Sandy's death in 2014. Art worked in various areas of finance and insurance throughout his career. He worked as an accountant and an auditor for many major companies, including Anheuser-Busch and Montgomery Ward. He eventually started his own company, Schrieber and Associates, as an independent insurance auditor. In his later years, he became a financial examiner for the State of Missouri, Department of Insurance, and was briefly the interim chief of the Department of Insurance. Art was an avid jogger in his middle years, and would regularly compete in 10K runs in St. Louis. He enjoyed model railroads, especially with his boys, and playing bridge with his wife and sisters. He was an elder in his church, volunteered with The Freedom School in St. Louis, and participated with Habitat for Humanity. He was an accomplished poker player, and learned about handicapping horse racing and professional basketball. He was blessed with participating in a Greater St. Louis Honor Flight on Veteran's Day Weekend, 2016. He really didn't like cats. Memorial Service: December 16, 2020 10:00am,Bonhomme Presbyterian Church,14820 Conway Road Chesterfield, MO 63017.

The family of Arthur C Schrieber created this Life Tributes page to make it easy to share your memories.

Send flowers to the Schrieber family.